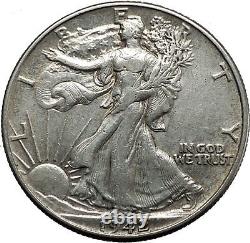 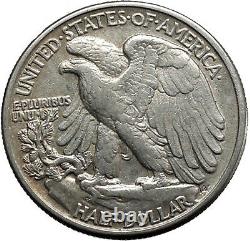 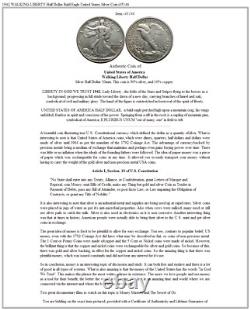 Item: i45146 Authentic Coin of. United States of America Walking Liberty Half Dollar Silver Half Dollar 30mm. This coin is 90% silver, and 10% copper.

LIBERTY IN GOD WE TRUST 1942, Lady Liberty , the folds of the Stars and Stripes flying to the breeze as a background, progressing in full stride toward the dawn of a new day, carrying branches of laurel and oak, symbolical of civil and military glory. The hand of the figure is outstretched in bestowal of the spirit of liberty. UNITED STATES OF AMERICA HALF DOLLAR, a bald eagle perched high upon a mountain crag, his wings unfolded, fearless in spirit and conscious of his power. Springing from a rift in the rock is a sapling of mountain pine, symbolical of America ; E PLURIBUS UNUM "out of many, one" in field to left.

A beautiful coin illustrating true U. Constitutional currency which defined the dollar as a quantity of silver.

What is interesting to note is that United States of America coins, which were dimes, quarters, half dollars and dollars were made of silver until 1964 as per the mandate of the 1792 Coinage Act. There was little or no inflation when the ideals of the founding fathers were followed. It is also interesting to note that silver is an industrial metal and supplies are being used up at rapid rates.

Silver coins were placed in jugs of water as per it's anti-microbial properties. Also when cows were milked, many used or still use silver pails to catch the milk. Silver is also used in electronics as it is non-corrosive. Another interesting thing was that at times in history, American people were actually able to bring their silver to the U. The 1 Cent or Penny Coins were made of copper and the 5 Cent or Nickel coins were made of nickel.

However, the brilliant thing is that the copper and nickel coins were exchangeable for silver and gold coins. So because of this, there was gold and silver backing, in effect for the copper and nickel coins. It can both free and enslave and there is a lot of good in all types of systems. This makes this phrase the most written phrase in existence. We live in an amazing time and world where we are connected via the internet and where the best ideas are winning.

The Walking Liberty half dollar was a silver 50-cent piece or half dollar coin issued by the United States Mint from 1916 to 1947; it was designed by Adolph A. In 1915, the new Mint Director, Robert W. Woolley , came to believe that he was not only allowed but required by law to replace coin designs that had been in use for 25 years. He therefore began the process of replacing the Barber coinage : dimes , quarters and half dollars, all bearing similar designs by long-time Mint Engraver Charles E. Barber , and first struck in 1892.

Woolley had the Commission of Fine Arts conduct a competition, as a result of which Weinman was selected to design the dime and half dollar. Weinman's design of Liberty striding towards the Sun for the half dollar proved difficult to perfect, and Treasury Secretary William G.

McAdoo , whose department included the Mint, considered having Barber create his own design. Mint officials were successful in getting Weinman's design into production, although it never struck very well, which may have been a factor in its replacement by the Franklin half dollar beginning in 1948. Nevertheless, art historian Cornelius Vermeule considered the piece to be among the most beautiful US coins. Since 1986, a modification of Weinman's obverse design has been used for the American Silver Eagle. Goddesses named for and representing the concept Liberty have existed in many cultures, including classical examples dating from the Roman Empire and some national symbols such as the British " Britannia " or the Irish " Kathleen Ni Houlihan ".

The ancient Roman goddess Libertas was honored during the second Punic War by a temple erected on the Aventine Hill in Rome by the father of Tiberius Gracchus. A statue in her honor was also raised by Clodius on the site of Marcus Tullius Cicero's house after it had been razed.

The figure also resembles Sol Invictus, the Roman god of sun. In 1793, during the French Revolution , the Notre Dame de Paris cathedral was turned into a " Cult of Reason " and for a time "Lady Liberty" replaced the Virgin Mary on several altars. National embodiments of Liberty include Britannia in the United Kingdom , " Liberty Enlightening the World, " commonly known as the Statue of Liberty in the United States of America , and Marianne in France. Embodiments of the goddess Liberty in the United States of America include Columbia , which is yet another personification of the goddess Liberty.

The bald eagle (Haliaeetus leucocephalus, from Greek hali- = sea, aietos = eagle , leuco- = white, cephalos = head) is a bird of prey found in North America. A sea eagle , it has two known sub-species and forms a species pair with the white-tailed eagle (Haliaeetus albicilla). It is found near large bodies of open water with an abundant food supply and old-growth trees for nesting. The bald eagle is an opportunistic feeder which subsists mainly on fish, which it swoops down and snatches from the water with its talons.

It builds the largest nest of any North American bird and the largest tree nests ever recorded for any animal species, up to 4 m (13 ft) deep, 2.5 m (8.2 ft) wide, and 1 metric ton (1.1 short tons) in weight. Sexual maturity is attained at the age of four to five years. Bald eagles are not actually bald ; the name derives from an older meaning of "white headed". The adult is mainly brown with a white head and tail. The sexes are identical in plumage , but females are about 25 percent larger than males.

The beak is large and hooked. The plumage of the immature is brown. The bald eagle is both the national bird and national animal of the United States of America. The bald eagle appears on its Seal. In the late 20th century it was on the brink of extirpation in the continental United States.

The long title of the legislation is An act establishing a mint, and regulating the Coins of the United States. By the Act, the Mint was to be situated at the seat of government of the United States. The five original officers of the U. Mint were a Director, an Assayer, a Chief Coiner, an Engraver, and a Treasurer (not the same as the Secretary of the Treasury).

The Act allowed that one person could perform the functions of Chief Coiner and Engraver. Although some of the provisions in the 1792 Coinage Act were adjusted as time went by, the majority of the rules specified in this Act remained in effect for many decades. Essentially, it provided the basic framework on which all subsequent coinage production was based. While the first draft of the Act stipulated that all coins would employ a portrait of the president on the obverse, the final version called for an image emblematic of liberty.

The Act also authorized construction of a mint building in Philadelphia , the nation's capital. This was the first federal building erected under the United States Constitution. Mint director David Rittenhouse laid the building's cornerstone on July 31.

On May 8, 1792 An Act to Provide For a Copper Coinage was signed into law by President George Washington. This legislation resulted in the birth of the copper cent, from which descends today's one cent piece. The Act also stipulated that the director of the mint... To be coined at the mint into cents and half-cents...

And be paid into the treasury of the United States, thence to issue into circulation. Merchants and bankers were reluctant to bring silver bullion to the Mint because the disclosure of the illegal silver standard that was previously in effect. The most immediate effect of this practice was that depositors ended up paying an addition 2.5 grams of silver bullion (about 10% extra) for every dollar they received Taxay, 1966, p. When this became widely known, bullion deposits brought to the mint declined significantly in 1796 and 1797.

11 pennyweights (17.1 g) of copper. Pennyweights (8.55 g) of copper. The coins were to contain the following markings. One side was to have an impression emblematic of liberty, with the inscription "Liberty", and the year of the coinage.

The paragraph summary states: "Persons may bring gold and silver bullion, to be coined free of expense;". Quality control measures were implemented in that from each separate mass of gold or silver used to produce coins, three coins were set aside by the treasurer. Each year on the last Monday in July, under the inspection of the Chief Justice , the Secretary and Comptroller of the Treasury, the Secretary of State , and the Attorney General , the coins were to be assayed and if the coins did not meet established standards, the officers were disqualified from office. The meetings later became formalized as the United States Assay Commission , which continued meeting until it was disbanded in 1980.

Section 19 of the Act established a penalty of death for debasing the gold or silver coins authorized by the Act, or embezzlement of the metals for those coins, by officers or employees of the mint; this section of the Act apparently remains in effect and would, in theory, continue to apply in the case of any of the gold or silver coins which shall be struck or coined at the said mint. At present the only gold or silver coins struck by the US mint are the American Silver Eagle and the American Gold Eagle coins, some Proof coinage at the San Francisco Mint , such as the silver US State Quarters , and much of the Commemorative coinage of the United States. All other sections of the act have been superseded, as for example the Coinage Act of 1834 changing the silver-to-gold weight ratio. Various acts have subsequently been passed affecting the amount and type of metal in U. Coins, so that today there is no legal definition of the term "dollar" to be found in U.

Current statutes regulating coinage in the United States may be found in Title 31 of the United States Code. What is a certificate of authenticity and what guarantees do you give that the item is authentic? You will be quite happy with what you get with the COA; a professional presentation of the coin, with all of the relevant information and a picture of the coin you saw in the listing.

Is there a number I can call you with questions about my order? When should I leave feedback? Once you receive your order, please leave a positive. Please don't leave any negative feedbacks, as it happens many times that people rush to leave feedback before letting sufficient time for the order to arrive.

The matter of fact is that any issues can be resolved, as reputation is most important to me. My goal is to provide superior products and quality of service.

This item is in the category "Coins & Paper Money\Coins: US\Half Dollars\Liberty Walking (1916-47)". The seller is "highrating_lowprice" and is located in this country: US.