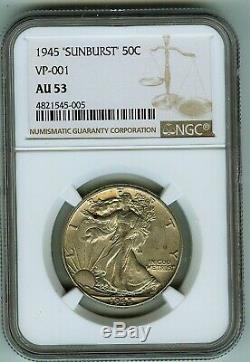 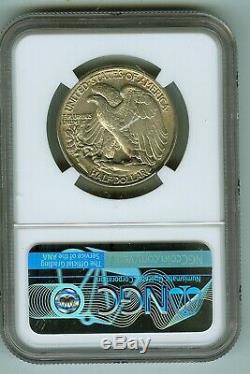 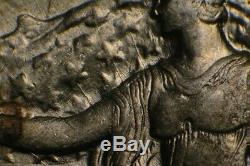 White, average strike, with most original luster remaining. This new variety was reported in Numismatic News as a new form of die stress (Below). Fey's confirmation specimen to Mr.

Baker's discovery and the first one certified by NGC as a new variety. Check out our other listings for coins, books, tokens and medals. Discovery of a New Kind of Die Variety.

A 1945 Walking Liberty Half with Radiating Die Stress Cracks or Incised Lines. Although die cracks sometimes emanate from the edges of a coin (called radial die cracks), and occasionally in the central area of the die in a random fashion, this is the first instance that we are aware in which multiple die cracks or perhaps incised lines appear to be emanating in a radial fashion from near the center of the die. The discovery coin was first shown to die variety specialist Michael S. Fey by owner Yosef Baker at a local Parsippany, NJ coin show. Fey, then searched to see if another example could be found.

He confirmed the variety by finding a second specimen, an almost uncirculated specimen. He then shared his findings with noted metallurgist and past Fly-In Club President Chris Pilliod back in 2010 for his thoughts. They discussed two possible causes for the lines. Either the die engraver purposely put them there, or they came about during the manufacture, sinking or striking of the die.

Since no other coin that they could recall showed such die cracking, they decided to take a closer look. Pilliod performed Scanning Electron Microscopy (SEM) on the coin. Although the radiating lines, at least six, emanating from Ms.

Libertys outstretched arm and shoulder appeared fairly straight at 10x magnification, the SEM revealed a more jagged, uneven appearance indicating that they likely arose when the die was made, or the coin was struck. He later hypothesized The defect is a result of metal fatigue, from the cyclical stress of the die striking the coin.

Fatigue must initiate from a defect or flaw in the steel or weakness created by a design feature. In this case what created the weakness occurred during the melting of the die steel. Die steels are in a family of alloys that are very prone to solidification defects and must be cast very carefully or defects can be created while the metal is solidifying from the liquid state. Pilliod further stated, In the past forty years or so the Mint has evolved to a more refined and purer die steel by adding a secondary re-melting operation which eliminates these solidification defects. But in 1945 this technology was just evolving and it would not be adapted to the 52100 and L6 die steels the Mint employs today until the 1970s and 80s. In any event, this is the first time he had heard or seen of this type of die stress on a coin. The coin made its way to noted variety specialist Ken Potter who claimed, this was one of the most beautiful series of radiating die cracks I have ever seen on a coin! I could see somebody wanting one of these. He took several photographs of the coin, with the one pictured appearing above. Pilliod that the cause was die stress.

He did not believe the lines were made by an engraver cutting into the die as with the tailfeathers on the 1952 Superbird quarter, because they meandered too much like die cracks to be hand engraved. Next, the coin made its way to Cherrypickers variety specialist and author, Bill Fivaz who responded when asked if he had ever seen one before, Nopeits new to me. He made a notation of the terminology die stress cracks and thought it might better explain the variety.

He agreed with Chris Pilliod and Ken Potter that it looks like die stress damage in a relatively deep part of the die. Lange, attributor and variety specialist at NGC next reviewed the above image of the new variety. He disagreed with the die fatigue concept, as the lines were too sharply incised to have occurred randomly. Since 1945 P halves are so often found with severely worn dies (no AW, for example), my first impression is that the engraver had incised these lines on the working die as a guide to restoring some lost details.

It will be interesting to see if any more examples the 1945 Walking Liberty Half with radiating die cracks or perhaps incised lines surfaces, particularly early die states, or if any more of this type of die variety surfaces on other coins. One thing is for sure.

There are still new and exciting things to be discovered about our coinage. Actual images of item(s) are shown above. Every attempt is made to accurately represent the item(s) with close up, unedited pictures and honest descriptions. We will consider all reasonable claims. To find out more about us! The item "1945 Walking Liberty 50c Sunburst Variety VP-001 NGC 53 1st Certified Specimen" is in sale since Tuesday, May 14, 2019.

This item is in the category "Coins & Paper Money\Coins\ US\Half Dollars\Liberty Walking (1916-47)". The seller is "rciscoins" and is located in Ironia, New Jersey. This item can be shipped to United States.