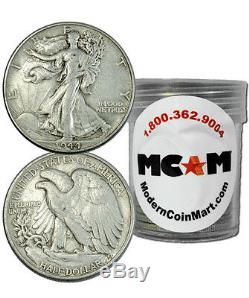 The front of this coin is the same design that was resurrected for the obverse of the modern American Silver Eagle. It was actually chosen for the Silver Eagle because of its widespread popularity and appeal. It was originally designed and put into circulation in 1916. This design by Adolph Weinman replaced the Barber half dollar.